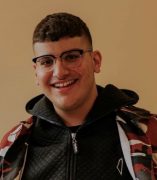 Fathi Mahmoud is a Palestinian student born and raised in the Southside suburbs of Chicago. He is majoring in Information and Decision Science in the College of Business and had finished his Associate Degree in Liberat Arts at Moraine Valley Community College. Previously, he was a Youth Coordinator for American Muslims for Palestine and was also President and Founder of the Muslim Student Association at Reavis High School. He is interested in Arab American Diaspora involvement and further hopes to see ethnic communities unite. Fathi is also an Arab American Content Creator and makes videos and other forms of media across different social media platforms. Fathi hopes to have more students appreciate and acknowledge their ethnic heritage and background.