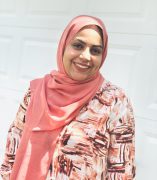 Sarah Hassan is a first-generation Egyptian American who was born and raised in the southwest suburbs of Chicago. She is a senior who is pursuing a B.S. in Integrated Health Studies with a Concentration in Health Sciences. Sarah is involved in the Muslim Student Association, Honors College, UIC Choirs, and Campus Housing Running Club. After graduating, she plans to pursue an M.S. in Speech Pathology where she will learn how to treat future patients and help them overcome speech impediments. Sarah’s interest in working for the ArabAmCC stemmed from her desire to have minority students, particularly those of Middle Eastern and North African (MENA) descent, be accurately represented on all UIC documents. As someone who is living in America as a minority, Sarah understands the struggle of not being accurately represented and advocated for; therefore, she advocates for others and herself while giving students the resources and confidence to advocate for themselves. While working as a Peer Mentor for Campus Housing, Sarah supported and advocated for her students by giving them the confidence and tools to speak up for themselves. As the Data and Content Management Coordinator for the ArabAmCC, Sarah is excited to give underrepresented MENA students the opportunity to advocate for themselves and share their story.