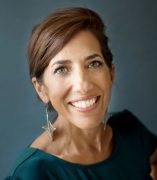 Nadine Naber is Professor in the Gender and Women’s Studies Program and the Global Asian Studies Program and holds an affiliation with the Department of Anthropology at the University of Illinois, Chicago. Dr. Naber came to the University of Illinois from the University of Michigan, Ann Arbor where she co- founded Arab and Muslim American Studies (an Ethnic Studies unit within the Program in American Culture). Dr. Naber’s research interests lie at the intersections of transnational feminisms; women of color and queer of color theory; de-colonizing feminisms; empire studies; critical race studies; and Middle East Studies; and Arab American Studies. Drawing upon these fields, Nadine’s research theorizes the racialization of Arab and Muslim Americans within the contexts of empire and diaspora and has sought to answer the following question: How can Arab American Studies respond to Orientalism and tackle sexism, homophobia, and racism in ways that neither reinscribe Arab-bashing nor engage in Orientalism? Dr. Naber’s current book in progress focuses on radical mothering in the context of protest movements of the Egyptian revolution and Chicago’s immigrant and people of color-based movements against state violence.

Dr. Naber is author of Arab America: Gender, Cultural Politics, and Activism (NYU Press, 2012). She is co-editor of the books Race and Arab Americans (Syracuse University Press, 2008); Arab and Arab American Feminisms, winner of the Arab American Book Award 2012 (Syracuse University Press, 2010); and The Color of Violence (South End Press, 2006). Dr. Naber is an editorial board member of the Critical Ethnic Studies Journal, the Journal of Palestine Studies, and Al-Shabakah and an advisory board member of the book series Expanding Frontiers: Interdisciplinary Approaches to Studies of Women, Gender, and Sexuality with the University of Nebraska Press and the series Decolonizing Feminisms: Anti-racist and Transnational Praxis with the University of Washington Press. She has served as an international fellow with the Open Society Foundation and an expert author for the United Nations Economic and Social Commission for West Asia.