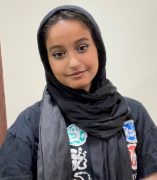 Nadiah Alyafai is a Yemeni American who was born and raised in the southwest suburbs of Illinois. She is a student at UIC and is majoring in Architectural Studies and Interdisciplinary Education of the Arts. She began understanding the struggles in which Arabs and Muslims face in 2017 when she started her journey as a youth organizer of the Arab community in the Chicagoland area. Participating in many town halls, direct actions, and community events she was able to rise to the scene of becoming a lead organizer. She currently takes part in politically educating youth in the Southwest suburbs, who were once in her position, and develops their organizing and leadership skills. She joined the Arab American Cultural Center with the intent to continue to serve her community on Campus and allow for others to take pride in fighting for liberation and representation.